Logical Argument Against Free Will 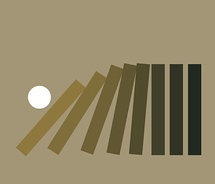 This is a logical argument I created several months back that attempts to prove free will is impossible. It's been tested but it's not necessarily in its final form. Let me know if you think it succeeds or not.

Most people believe in libertarian free will. That is, they reject determinism, are incompatibilists, and believe that our will, mind, and consciousness are not determined by anything and are free to choose any number of possible courses of action. Libertarian free will requires at least 3 things:


This view is popular among lay people but not among scientists and philosophers.[1] Why is this? It's because not only is libertarian free will in violation of our best scientific theories, it's incoherent.

One simple question to ask the libertarian is: Do our thoughts have causes? Yes or no?

If our thoughts have causes, whatever caused them can't be our will or our mind, because our thoughts are our will and mind. And saying that our soul causes our thoughts (or will or mind) just pushes the issue back one step further, because the question now becomes is the soul caused when it causes the will? If it is caused, then whatever caused it can't be the soul (or the mind or the will), it has to be something else that is not you. Once you have that you are essentially admitting that your will is not truly free since it has a cause that is not a part of you and not something you could have had any control over.

Therefore this premise is true: If our thoughts (or whatever caused them) are caused we cannot be in control of them


If our thoughts do not have causes, then you are saying that they begin to exist without a cause. Without a cause they would be totally random fluctuations and it would be a mere coincidence that they had any connection or relationship to the physical world or reality. Since you can't have any control over something that is uncaused by definition, you cannot be in control of your will if your will or thoughts are uncaused. This would also apply to any claim that the soul causes the thoughts if you claim the soul is uncaused. Additionally, this would violate the kalam cosmological argument's first premise (everything that begins to exist has a cause) and would essentially falsify it. This is a very popular metaphysical principle many theists believe (who also believe in libertarian free will).

Therefore this premise is true: If our thoughts (or whatever caused them) are uncaused we cannot be in control of them


On top of that, the ability to "choose" your thoughts is logically impossible. You can't choose what your next thought, desire, or idea will be, without that thought, desire, or idea already popping into your consciousness in a manner you couldn't have freely controlled. In order to choose your next thought, you'd have to think about it, before you think about it. That's incoherent. You can't have a thought, about a thought, before you have the thought. If you can't choose your next thought, or any of your thoughts, how is your will or mind controlled by you, and in what sense is it free? It isn't. Thoughts arise in consciousness and we have no control over it.

Therefore this premise is true: It is logically impossible to choose our thoughts


Hence we can argue:


Right now I'm only asking for a justification of (1) above from the requirements of libertarian free will; (2) and (3) are a whole other argument that only adds to the difficulty the libertarian has. Basically, one must first establish whether libertarian free will is even logically possible before one can establish that it's true. And that's my challenge. Notice that this argument makes no assumption about whether things must have causes or not, nor does it make any assumptions about whether we have a soul or not, or whether materialism is true. It is agnostic on all of these views.


So what's a libertarian free will believer to do? Well, here are some typical nonstarter responses:

1. If we don't have free will moral responsibility goes out the window!

This is an informal fallacy known as an appeal to consequences. The undesirable consequences of a thing say nothing about whether it is false. For example, creationists will often say, "If we evolved from apes then we're just animals. I don't like that, so therefore evolution is false." This is a fallacious way of reasoning. The undesirability of being related to other animals like apes says nothing about whether evolution is false.

2. If we don't have free will rationality goes out the window!

This is another appeal to consequences. If libertarian free will itself is incoherent and its coherency cannot be established, then you cannot claim that without it there is no rationality. You'd be arguing from a square-circle. It is also not evident on closer inspection that rationality relies on libertarian free will since the whole argument above demonstrates exactly why there is no rational basis for it.


Basically, with this argument I want to challenge all believers in libertarian free will to make a positive argument for the coherency of libertarian free will. I don't need every single detail explained, I just need you to show how it is even logically coherent and not self-refuting. Or, admit that you can't. I want respondents to focus on the positive argument for LFW, not fallacious appeals to consequences. So who is up to the challenge?

[1] One of the largest surveys of philosophers showed that only 13.7% accept or lean toward libertarian free will, and among philosophers of mind, that number drops to 11%.